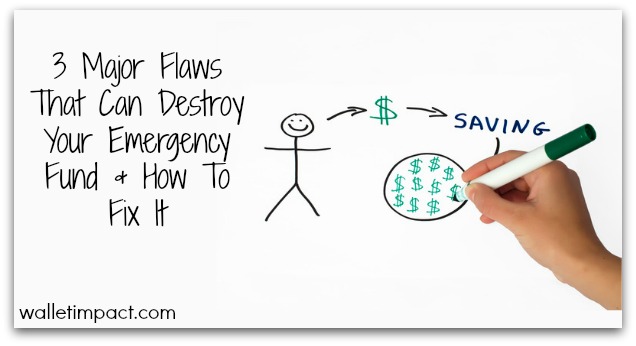 Do you have an emergency fund?

I have to admit it’s probably the most critical part to my financial well being.  It protects me when my car breaks down, an unexpected medical bill pops up, or if I need to fix something around the house.

More than anything though it helps me sleep better at night.  It keeps me from waking up in the middle of the night feeling that financial dread of how I’m I going to pay next months bills.

2008 was the year I got serious about my emergency fund.  I had managed to build up a $20,000 emergency fund  over a 4 year period.  We saved religiously week in and week out, and then something happened, we managed to spend it all.  We had gotten in over our heads and forgot the cardinal rules that had come to help us out so much.

3 Reasons Why My Emergency Fund Failed

I Didn’t Have A Dedicated Account. Having a dedicated account would have allowed me to keep all of my emergency fund cash in one specific place rather than scattered over several accounts.  This made it hard to keep, track, and identify, which money was for what.

On top of that I also found that keeping this dedicated account at a different bank or credit union would have prevented me from having easy access to it.  I don’t know if it’s just me but when I have cash in my hand my first instinct is to spend it.

To prevent this I’ve learned that I need to keep it in one place where I can’t access it so easily and spend it on things that are not for its intended purpose.

But this wasn’t exactly full proof.  Everything was working great until I built a new house.  As  a result I began to put this money towards furnishing my house and postpone putting money towards my emergency fund for the time being.

However since I had gotten so accustom to using this money in other places I realized it was going to be a lot harder to go back and save the amount of money I was saving before I started building my house.

If I would have had a more automated set up I wouldn’t have quit putting money towards my emergency fund and I would likely still have a decent amount of cash in it.

I Didn’t Pay Attention.  Finally, the biggest reason my emergency fund failed was because I didn’t pay attention to my finances close enough.  When I was building my house I failed to keep my budget and spending in check.

Over time I got sloppy with my spending and before I knew it I had $6500 of credit card debt and even worse my entire emergency fund was gone.  Now I did manage to pay off this debt and build back a small emergency fund, which you can read about that here.

However it is nowhere near the amount I had before and now I find myself in a place where I am starting all over again.  So what is the solution to this problem?  Below is my current solution, and it’s simpler than you might think.

The solution to this problem is to have the right tools.  For example if you had to build an entire house with a wrench and a screw driver you would probably realize rather quickly that having a hammer would work a lot better.

When it comes to your finances the same holds true.  You want the right tools in the right place at the right time.  So what do I use to for my emergency fund now?

Today things are much different.  Now I use the Capital One 360 Savings Account to do all the heavy lifting for me.  This is an online based account that has no fees, carry’s an attractive interest rate, and best of all you can automate the entire savings process.

If you would like to learn more about how I did this you can check out my tutorial here.