The Financial Domino Effect: How To Stop It From Happening To You 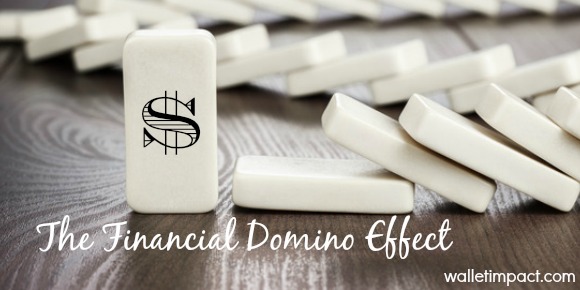 Are you stuck in a financial domino effect?

As a kid I use to have a lot of fun with domino’s.  I would stack them up in a long row with all kinds of fun little twist and turns to see what kind of unique ideas I could come up.  Then after a few hours of preparation the big moment would come.

If you’ve never done this as a kid here is a great video I found on YouTube that show exactly what I’m talking about.

How The Financial Domino Effect Works

A  financial domino effect works in much the same way.  It starts by knocking down one domino, that knocks the next one,  and so on but what’s worse about this domino effect is that it doesn’t just know the next domino down but rather one that is twice the size of the next one.

Here is an example of how this has happened in my own financial life.

In total this one little domino effect ended up costing me $8000, all because I made one bad decision to buy a timeshare that I should have never bought in the first place.

So the questions becomes how do avoid this from happening to us?

How To Avoid A Domino Effect

To avoid this from happening to you I’ve learned three really important lessons that have helped me prevent future domino effects.

Know When To Cut Your Losses.  First, know when to cut your losses and move on.  In my case with my timeshare I was able to get a buy back offer of $400.  It wasn’t even close to the $4500 I paid for the timeshare but I knew that if I would cut my loses now I’d avoid future cost that I would have to pay down the road.

So how do you know when to cut your loses?  I base mine on value.  If I’m not getting the value from something I think I should be getting then I know it’s time to stop putting money into it and step away.

The thing is you can always get money back but what if it cost you more than that such as your home, your family, or even your life.  To me these are the most valuable things and even though we may be losing a lot of  money it could always be worse.

Stay Educated.  Next it’s important to stay educated when making a buying decision, especially as big as the one I made.  When I was buying the timeshare I had no idea of some of the problems I would face.

I didn’t know that timeshares were hard to sell or that they would cost me so much in things like maintenance fees.  If I would have known all of these things up front I would have never bought it in the first place.

So before you make a big purchase make sure you do your research beforehand to know if what you are getting is a good deal or not.  This could be as simple as doing a search on the internet or talking to someone who already has what you want.

Think Long Term.  Finally, don’t just think in the present about what you want right know but rather consider the long term effects you might have to deal with.  When I bought my timeshare I was thinking this would give us a great excuse to take a vacation every year.

What I failed to realize is how much money this would cost me in the long run putting me in a financially tough position making it hard for me to even use the timeshare.  With my emergency fund gone and living on a fairly tight budget I didn’t have ability to take a nice vacation anymore.

However don’t consider just the financial aspects, with things like kids and work  getting in the way I found it very hard to just pick up and go on a vacation.  In fact most of my vacations at that time ended up being a long weekend at best.

Wrapping up take a moment to consider the 3 tips I’ve provided to help you avoid a financial domino effect in your life.  When it comes down to it you have the power to change your situation at any time, you just have to be willing to take that next step and go for it.

Are times going to be tough, sure.

But this doesn’t mean you should give up.  You may fail from time to time but this doesn’t make you a quitter in any way at all.  To go to that next level you need take action and know that it will be tough.